Unable to update the EntitySet ‘PlanPriceHistory’ because it has a DefiningQuery and no <InsertFunction> element exists in the <ModificationFunctionMapping> element to support the current operation.

While I was getting my feet wet in Entity Framework 4 (from the Visual Studio 2010 Beta 2 release), I generated my EDMX from an existing legacy database. All was going well – for a few days in fact, until I attempted to Insert an entity to a specific table (seen below). After some digging around in my model/EDMX configuration thinking something was wrong in there, I decided to open the actual table definition for the EntitySet (‘PlanPriceHistory’) that EF was complaining about. The problem with this particular table is that it logically uses a composite primary key (but was mistakenly not defined as such in the database).

Finally, open your EDMX, select the Entity, and Update Model from Database… 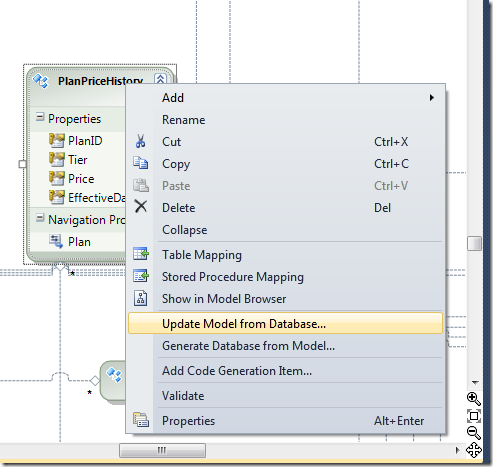 All set, now back to business.