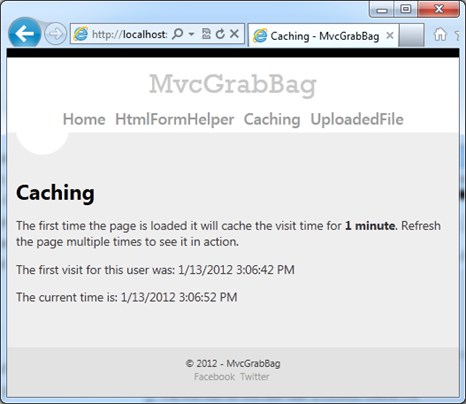 Many ASP.NET applications utilize the System.Web.Caching.Cache in some way. While it offers a pretty simple Dictionary-like API that your app can start using immediately, I typically create a combined “tell-don’t-ask” wrapper around it – which has some additional architectural benefits as well.

Out of the box concerns

A very common usage of the Cache API can be seen below, but there are a few initial problems I have with it:

The wrapper I create is used below. It’s nothing revolutionary, but does try to cut down on the redundancy, while adding a few features as well. The following code functions exactly the same as the code above.

The three biggest changes are:

Aside from these API usage changes we also get 2 big architectural advantages:

You may notice that our controller still has intimate knowledge of our caching strategy: duration, scope, the string-based key, etc. This code-duplication lightning-rod could easily be copy-pasted around. One possible way to solve this would be to create something like the following AppCache.

Usage in a Controller

Now we are completely free to change the caching strategy of our application in a single place.

Rather than pasting the full source here, I will be publishing it along with a sample project at https://mvcgrabbag.codeplex.com